The GQ Guide to Suits

September 27, 2018 / 2223
Our definitive advice on how to master the suits you already own—and every new one you’ll ever buy

Every man should own a great suit. Zero exceptions. Just listen to Jon Hamm, whose role in Mad Men pretty much single-handedly made suiting glamorous again. “You button up into one of those suits,” he told us once, “and it’s like, ‘Okay, there’s a certain way that I feel. I feel confident. I feel put together. I feel great-looking.” And while a great suit will make you feel (and look) sharp, world-wise, and sophisticated, a bad one will make you look like a hack or some man-child who still gets dressed by his mommy. So it helps to know a thing or two about buying, wearing, and caring for the one you choose.

Every guy—even Ralph Lauren himself—started as a suit virgin, and we know that your first time standing in the suiting section can be overwhelming. Our suit guide is here to help you find a great suit, at whatever price you choose to pay, that’ll make you look smart, handsome, and like you’ve got the world by the nuts.

Let’s start with the basics. If you need a suit but don’t know which kind of suit is right for you and your life. Buying a new suit doesn’t start in the store; it starts in your head. Is the suit for work? Date night? A buddy’s wedding? All three? Is this your first and only suit or your thirteenth suit, intended for a special occasion? Know that and you can make the right choices, starting with color. Your best bet is to opt for one in a solid true navy blue or charcoal gray. Both colors—a.k.a. menswear designers’ go-to neutrals—work with every shirt-and-tie combo you can think of and a whole lot more (denim shirts, T-shirts, fine gauge knits). They’re the standard.

There’s also black, Not for daytime wear and not as foolproof as you think. You imagine The Strokes, but you might end up with security guard. If you decide to go for black, make everything as skinny as possible. You won’t look like a maitre d’ if the cut of the suit is aggressively cool.

If you want to go bolder than solid colors, your best option is going the plaid suit route. Wearing a plaid or check suit is going to get you noticed and remembered—that’s the point. Make sure you stay out of overkill territory by keeping yours to one of the trusty menswear neutrals we just talked about (that would be gray, navy, and black).

And for the purposes of getting the most style miles out of your next suit, go for one in a light-to-mid-weight wool. It’s the most common suit fabric. Good for work. Good for job interviews. Good for pretty much everything.

Once you have a color and/or pattern in mind, the next step in your sartorial decision-making process is to decide on the type of suit you want. We’re talking silhouette and there are two ways to go:

Single-breasted jackets are 100 percent approved and always will be. Most of the suits in your arsenal should be single-breasted. But if you’re the kind of daredevil who wants to give 110 percent, step up to a double-breasted jacket. The new double-breasted suit comes is slim and trim, without the shoulder pads and droopy fits that signaled ’80s Wall Street excess. We like it because it projects an air of power and confidence.

There’s also the three-piece suit. You can still blow the doors off the conference room in a killer three-piece. The point we must make here is that the three-piece suit is not a costume. It should not be worn with a pocket watch or a newsboy cap. (Yes, Cillian Murphy in Peaky Blinders looks dope…for 1919.)

Before you start getting OCD about the size and fit of your suit, you should decide what style of suit you want. And that’s all about the construction. Two buttons or three? (Answer: almost always two.) Notch or peak lapel? (Depends on the image you’re trying to project.) Meanwhile, a fourth button (don’t do it!) or paisley lining (hell, no!) can send all the wrong signals. The details make the suit. Let the following info be your guide to not screwing this suited thing up before you’ve started.

If you go the single-breasted suit route, your next course of action is to figure out the button stance that’s best for you. All or most of your suits should be two-button suits. This is the modern standard. One-button suits are good for formal, nighttime suits and for skinny rocker types who can wear anything (damn them). Unless you are an advanced suit-buyer, don’t go for a three-button suit unless the third button is hidden behind a “roll” of the lapel—an Italian move—so it actually looks like a two-button suit.

Next we’re moving on to lapels. There are two types most common in everyday suits and they’re names are peak (because they jut up and out toward your shoulder, ending in a point) and notch (self explanatory). Going with a notch lapel is like ordering the roast chicken: it’s a total fail-safe. A peak lapel is flashier and more formal a brasher, Euro-bred power move compared to the standard notch.

Don’t ignore the back of the jacket. It plays an integral role in a suit’s character. Most suits have rakish double vents these days, but the single vent is still a classic and all-American way to go. No vent = no dice. Put that thing back on the rack.

You also need to consider your suit’s pockets. Yes, pockets. The most common example of suit pockets in the wild are flap pockes, featuring a rectangular flap of fabric that hangs about two inches over the front of the pocket. (Your new jacket will arrive with its flap pockets sewn shut, but a seam puller, your tailor, or a simple index finger and a yank will open your flaps and make them functional.) Patch pockets look like were originally found on sporting jackets and are stitched to the outside of the jacket, not the inside. The sartorial net effect is that they give off a more casual, utilitarian vibe. Besom pockets are found on more formal jackets and tuxedos and have no flap. They’re super-clean and mean but not right for the office.

Now Make Sure It Fits

No matter how much it costs, a suit is only as good as its tailoring. Fit is everything. Once you’ve decided you want a two-button, single-breasted suit with a notch lapel, a double vent, and flap pockets (nice choosin’—it sounds like a winner), you’re ready to focus all your attention here. It doesn’t matter if your suit costs $500 or $5,000; if the thing fits like a garbage bag (or it’s so tight that your co-workers can count your leg hairs), it won’t look good. Suit jackets are shorter than they were a decade ago, but you don’t want your entire ass showing, either. If you hang your arms loose at your sides, your fingers should be able to easily cup the bottom hem of your suit jacket. Any shorter and you’ll look like a doll. Longer and you’ll look like an undertaker, or perhaps The Undertaker. Here’s how the rest should fit:

Your Shoulders: A tailor can’t fix a bunk, saggy shoulder, so make sure the seam ends right at the outside of yours. You want military precision here, fellas. Also: Most guys overestimate their jacket size. Think you’re a 42? Try a 40. Still got room to move? Try on a 38. When you put on a size that’s definitely too small, go back up a step. That’s your suit jacket.

Your Chest: With the jacket buttoned, the lapels should lie flat on your chest. If they bow out, you need a different size or a different brand, amigo. The modern GQ way is to keep the lapels moderately narrow, as J.Crew does here. We like a slim tie, slim lapels, and a small-collar dress shirt, so everything is in sync. For the record, the rule of thumb on lapel size goes like this: Big, wide lapels are for testosteronal alpha men, skinny lapels are for slick rock-’n’-rollers. Generally speaking, the rest of us should fall somewhere in between.

Around Your Torso: With the jacket buttoned, slide your thumb between the button and your gut. If your thumb is snug, good. If it’s a little loose, you’ll need to have your tailor take the jacket in a bit in the back.

Your Arms: They should hug your actual arms, closely following your natural lines, and stop in time to show a half-inch of shirt cuff. But don’t worry too much about the length or width while you’re at the store: Any decent tailor can sort out both the length and any excess bagginess. Just make sure you have your tailor take a careful look once you’ve bought the suit. Most guys—and many tailors—don’t consider whether they should have the arms of a suit slimmed down. They almost always should.

Your Pants: Fasten your pants at your natural waist (about an inch below your navel). Too loose? You know what to do: Talk to your tailor. One more oft-misunderstood/neglected step: If there’s too much fabric through the leg (i.e., if you can grab a fistful), ask a tailor to taper your pants. It’ll create a cleaner, slimmer line like those you see in the pages of our fine magazine. These days, we want our suit pants to fit like our jeans, and the key to that look is a tapered leg.

Your Pant Hems Most suits will come with long, unfinished hems. Get them tailored to hover just above your shoes, or right on top of your shoes—no longer. (Be a pro and say you want “no break.”) And don’t be afraid to ask if the store will do it gratis. 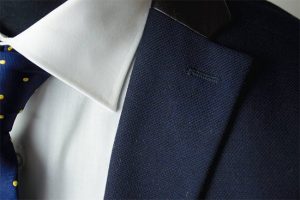 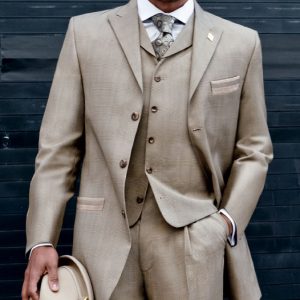 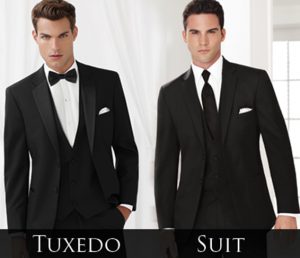 What is the difference between a tuxedo and a suit? 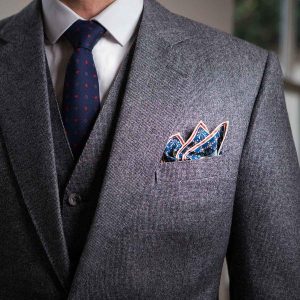 6 Ways to Fold a Pocket Square

How to Tie a Bow-Tie